Memoir of a Murderer Movie Review 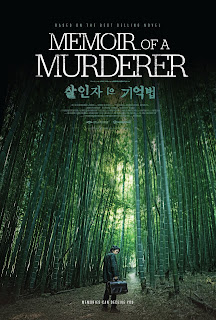 Memoir of a Murderer is just another fantastic Korean film that I have had the opportunity to see thanks to UPF!
MoaM grabbed my attention and never let go till the credits were rolling, MoaM takes a fresh approach to a tired  plot device...Amnesia/Alzheimer's.
The story evolves around an aging serial killer who is suffering from dementia/alzheimers who crosses paths with a young serial killer and one of the best killer V killa showdown's commences but for Kim Byeong Su the challenge to save his daughter and stop this young killer with a similar MO to Kim's is his dementia.
What I enjoyed most about this movie is the fact the layers that keep getting thrown into the story, it'll keep you engaged and guessing even after the movie is done! MoaM reminded me of both Memento and Primal Fear with a dash of The Usual Suspects.....yeah those are all great movies!
I highly recommend tracking this film down and watching it! It came out in 2017 so it's out there.

Posted by XxSITHappensxX at 11:47 AM

Email ThisBlogThis!Share to TwitterShare to FacebookShare to Pinterest
Labels: Memoir of a Murderer, Movies, Thriller