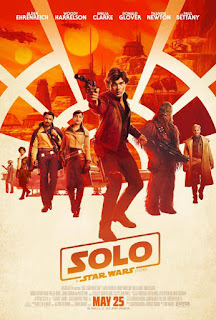 The second trailer for Solo dropped last night and it's actually not bad! The sets in Solo look really good and fit into Star Wars 100X more than TLJ's Canto Bite. Donald Glover still seems to be the highlight of this movie but I need to admit Alden seemed better in this trailer especially the scene on the Falcon when Chewy tells him how old he is.
And I still want to believe Thandie Newton's character is really Sana even though IMDB says her name is Val.
We also see Chewie having a shared moment with another wookie! Did chewie have a significant other.
And Lando droid L3 seems very "annimated" I think L2 and K2SO would compliment each other very well!
We also get a peek at the infamous sabacc game where someone loses the Falcon "fair and square", which again Donald Glover absolutely nails Lando!

Like I've said plenty of times in the past I had zero interest in this movie, It just seemed completely unnecessary but this trailer has piqued my interest a bit.

Posted by XxSITHappensxX at 9:24 AM