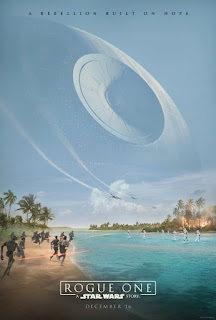 126 Days till Rogue One, I cannot wait for this movie! I'm now convinced this movie will be every thing TFA wasn't.
Ever since it was announced and the synopsis was given I have firmly believed Rogue One will bring back the wonder and excitement to the franchise, not regurgitate it!
So we have a motley crew of rebels who are sent on an impossible mission to steal the plans to the Death Star which bring them to the Planet Jedah home to an ancient Jedi temple, but why is the Empire on Jedah???Is there something on Jedah the Empire needs?
For those not up to speed with the chronology Rogue One takes place weeks or days before Star Wars Episode IV A New Hope, and based on what I've just seen they nailed the look!
On top of all the awesome in this trailer we also get Darth Vader in his prime!
I'm also a fan of Star Wars Rebels and with season 3 coming in September and Thrawn finally being inducted into cannon there are many questions, questions that need answers.
The two biggest for me are When will we see Ahsoka again and if Thrawn survives Rebels where is he throughout the OT and TFA?

Posted by XxSITHappensxX at 11:45 PM