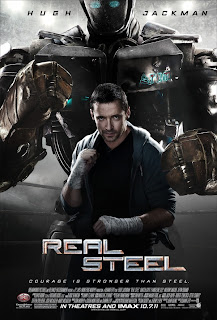 It's sad when a movie based on rockem' sockem' robots has more heart than a multi-million dollar franchise about sentient robotic life forms from another planet.
Real Steel doesn't pull any punches, what you see is what you get, a dead beat dad down on his luck, an adoptive couple who want a child but don't want to sacrifice their lifestyle in the process, a son who losses his mother and now finds he's an inconvenience to both his father and the couple who plan to adopt him and an old G2 sparring bot that bridges the gap between father and son.
Hugh Jackman did a decent job playing a total asshat in this movie, even by the end I really didn't care for Charlie Kenton, his son Max on the other hand was enjoyable and brought a solid performance to this movie, as I was watching him in the movie I was thinking to myself. "this kid would've made a much better anakin Skywalker than Jake Loyd" but then I remembered who wrote and directed TPM...
The real star in this movie was Atom, the old second generation sparring bot recovered by young Max. Seeing Max working with Atom was cute but the fights were the highlight of this movie, the effects are well done and are as entertaining as watching Rocky Balboa go toe to toe with Apollo Creed especially the title fight where Atom fights Zeus.
The movie is rife with stereotypes like Japanese make great tech but can't operate it....but neither can adults....only teens "get it". The movie also hints at the tension between good ol boys and blacks, that scene felt forced and really didn't didn't need to be in the movie.
Real Steel has some charm and you'll be routing for Atom till the bell rings,the fights are entertaining and the special effects are well done. Basically Real Steel is rockem sockem robots meets Rocky.
C+

Posted by XxSITHappensxX at 9:54 AM