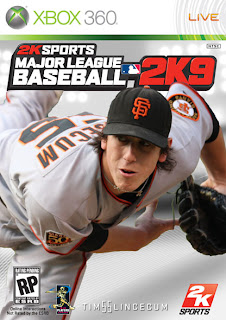 I was pumped for this new game. 2K8 left a bad taste in my mouth. I mean when you pitch and the computer is hitting home runs off of you when the pitch is wayyy off the plate, something is wrong.

So I decided this time to rent 2K9. I get it and am ready to begin in Franchise Mode. I pick the St.Louis Cardinals because that is my team and I'm from Missouri, so anyhow, the game has a different pitch mode, you have to use the right stick. They used this in 2K8 as well. But it sucked in that game because no matter how you pitched it either threw it down the middle or off the plate.

They fixed the controls this time around. It also feels like a more real baseball game, well as best as they can get it. The camera angles are different. When a ball is hit there is a sky camera panning down to see the whole field. I like that.

When you pitch you automatically pitch from the pitcher's point of view. That is pretty cool.

At first I had to get use to the timing of batting again. Hey, I haven't played a baseball game over the winter, so I need my timing back again, lol. My pitching mechanics were a bit off too.

I noticed the crowd is more involved this time around, they look better and act more like a crowd. When a home run or foul ball is hit, they'll dive, jump , and go crazy to get the ball.

They changed the commentators this time around too. I think they do a better job at actually talking about the game this time than the others did. Joe Morgan and Jon Miller have been on the last two games. It is Steve Phillips and Gary Thorne on 2K9.

There are still glitches in this new game and some bad weird things that happen. Hopefully they will fix them, but they aren't as bad, IMO as in the last two installments. I still think they put it out in a rush.

Right now, I have played through thirteen games and I am above .500 with a 8 - 5 record on above rookie difficulty.

I hope they either go watch a game and really understand how a baseball game works, or let some other company give it a try next time though.

I played MLB The Show on the PS3 and it has always been better in terms of how the game is in real life.