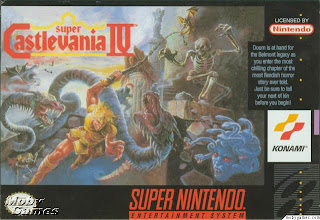 Not to be 1 up'd by his great great grand papy Trevor, Simon Belmont return's for Konami's first CastleVania in the 16 bit era.
According to the games instruction manual; Once every one-hundred years, there comes a time when the power of good is weakened, and men with evil in their hearts pray for the resurrection of the Prince of Darkness. And with each resurrection, his evil power grows stronger.

So are we to believe a hundred years have passed since Simon Belmont defeated Dracula in the original Castlevania? That is what the US instruction manual would have you believe;

It is time once again for Simon Belmont to call forth the powers of good to aid him in his battle. Armed with his mystical whip, his courage and the centuries-old knowledge of Belmont family training, he sets forth on his mission .

But Super Castlevania IV isn't actually part of the chronology it's a remake of the original in glorious 16 bit graphics, So it should've really been titled Super Castlevania. The game isn't a straight up remake either, it retains the basic platforming game play but it's really more of a reboot, as the game doesn't recreate the original stage for stage with a 16 bit coat of paint.

OK nitpicking aside, graphically Super Castlevania IV was an enormous improvement over it's predecessors and the audio soundtrack truly complimented the atmosphere of the game with it's remixed tracks and new additions.
The frame rate was also so smooth compared to it's 8 bit versions, Simon's animations for walking jumping and whipping were significantly more detailed and fluid. Simon also learned some new techniques with the whip, now you could control the whip in 8 different directions which would come in handy with another new game play addition, using the whip to swing across sections of the stage! That was a fun and well utilized throughout the game, it wasn't just a gimmick used a few times. Simon could also hold out his arm and let the whip dangle and/or "jiggle it".
The stages of Super CastleVania IV is where this game really shines, it expands on the basic stages of the original with altering the feel so much that it no longer played like it's 8 bit predecessors. My favorite stage was the 9th the Treasury, every aspect from the stages soundtrack to the ambient effects to the boss stood out, the stage was beautiful and the effects while battling the Gem Bat boss were a nice little touch.
Super CastleVania IV was one of the systems best titles.
9/10
Posted by XxSITHappensxX at 11:59 AM